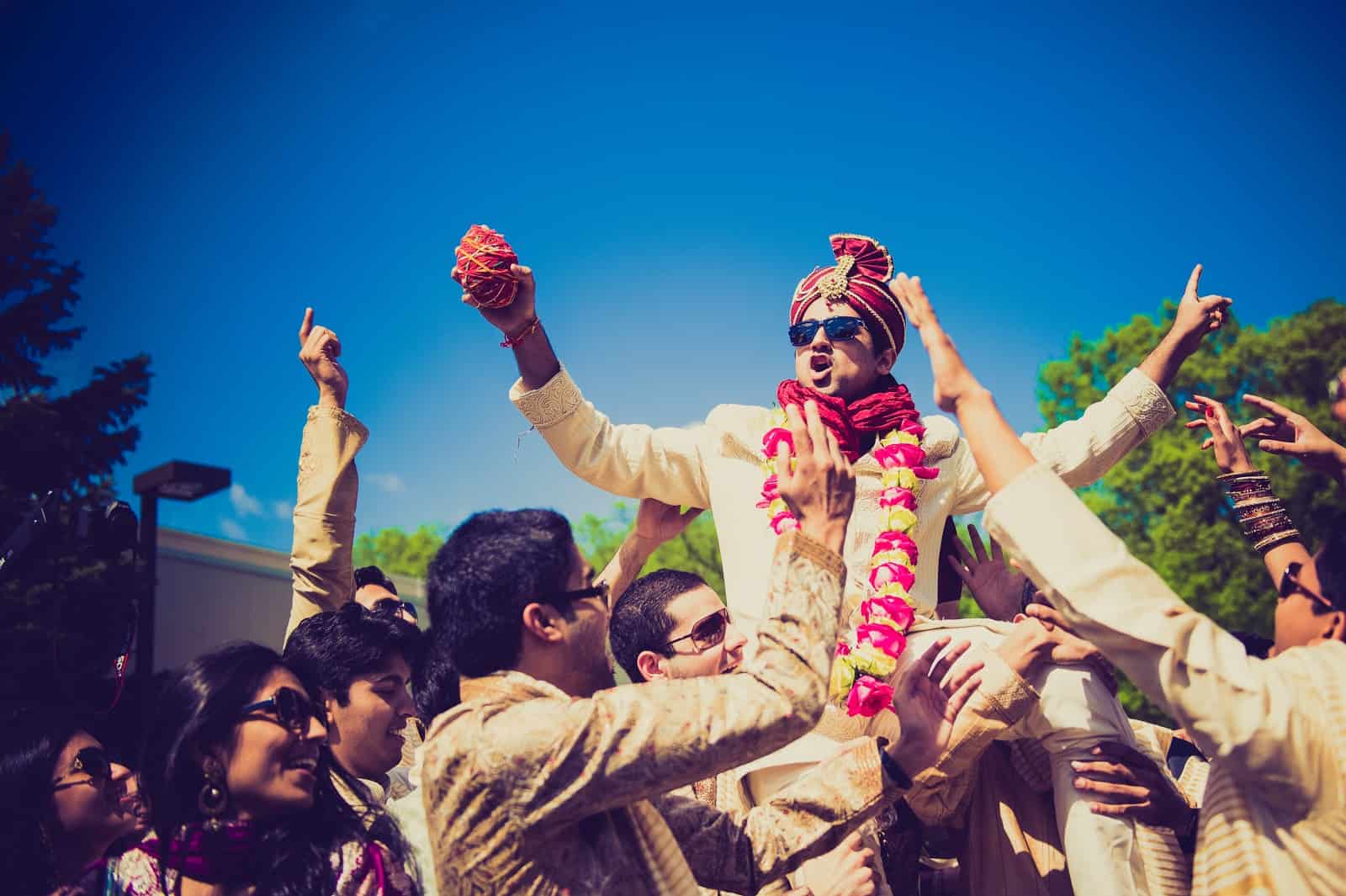 Hello from PhotosMadeEz, Where we Capture Smiles, One shot at a time.
I have been getting complaints from the grooms that I don’t write anything about them. Now what do I write about guys? I don’t write about gadgets or cars or remote control – the three basic necessity of a man!!!! See, I am such a wife, can’t give up the opportunity to crib about the remote. 🙁 Luckily PhotosMadeEz has the “man” power. They said – “Mou, how about PhotosMadeEz reviews the only time of the day when it’s all about the groom – Barat.” So Barat it is 🙂

Barat is the only time when the groom is the center of attraction, where he dresses in his wedding finery and travels to the venue for the ceremony. Typically the groom rides a decorated “ghori“. However, there are some who ride an elephant. When it comes to a horse it HAS to be WHITE. How come, that does not hold true when it comes to elephants?! Why this partiality I don’t know! 😉 We have also had a fair share of exotic cars serving as the groom’s ride – such as, Ferrari, Rolls Royce. A funny coincidence – a yellow Lamborghini from Lambo Baraats that was used at a wedding we photographed last weekend for Sudha and Pramaik’s Wedding at the Leonard’s Palazzo, was the same one that was a part of Minal and Druv’s Wedding at The Waterview we photographed last April!

The groom, along with the barati, which consist of his family and friends, are accompanied by the DJs playing the music in their cool barat-mobiles! Dholis typically escort them, playing the dhol or tasa  – my absolute favorite. Amazing how the barat dances in a coordinated way in the middle of the day in the scorching heat. You have to see it to believe it. One of our most memorable member of a barati was surely Jassi‘s 99-year old grandfather! We can never forget him dancing joyfully at his grandson’s barat at the Bridgewater Gurdwara and Nicholas‘s very American Grand Mother dressed in Indian attire dancing at the Barat. The Barat photos of PhotosMadeEz are never complete without the Bridesmaids and the Groomsmen dancing. And of course we never forget to take her bride peeking or throwing kisses at her Knight in Shining Armor.

Different communities have different rituals for the Barat. Punjabis have the “milni”, where groom & his baratis are formally welcomed by the bride’s family and often gifts are exchanged. After that the Bride’s sister and cousins make sure that the groom cant enter the Gurudwara to get married before paying them money  – another fun filled Punjabi ritual. The Gujaratis have a fun ritual called Jaan or Ponkvu, where the bride’s mother playfully tries to pinch the groom’s nose, which he tried to evade! This is followed by the Jaimala – exchange of garlands – when the bride finally comes out to greet her groom. The groom’s friends lift up high, so that the bride cannot reach him. But we are yet to see a barat where the bride is unsuccessful… because in the end, the groom always gives in. 🙂 We still remember our beautiful, blushing bride Hetal, approaching with a shy look on her face and not making eye contact with the groom. It was a very sweet moment. In South Indian Weddings, the brother of the bride washes the groom’s feet and welcomes him.

I hope the grooms are happy now! Thank you from the bottom of my heart for wanting me to write about you all. However much I pamper the brides, the wedding would not have happened without you. 🙂 Keep sending those emails to PhotosMadeEz.

Getting Ready Photos by PhotosMadeEz

Ras Garba before your Wedding